Willie “Shotgun” Simmons is a native of Quincy, Florida where he had a distinguished career as a player at Shanks High School.  Simmons was offered scholarships to play at the college level with 25 schools, and signed with Clemson University. In addition to a phenomenal collegiate career, Simmons was stellar in the classroom and earned his Bachelor’s Degree in Sports Marketing in only three years, the fastest any player had ever graduated from the school.  Simmons attempted to transfer to FAMU for his senior season, but was deemed ineligible to compete due to FAMU’s provisional status as a Division 1-A program. Instead, he enrolled at The Citadel. During his senior session he received All-Southern Conference First Team honors after leading the team to their first non-losing season in 10 years. While under his leadership, the Bulldogs also defeated Furman, Appalachia State, and Georgia Southern in the same season, a feat that had only been done by Marshall University.

Simmons began his coaching career in 2005 right here in Tallahassee as the quarterbacks coach and passing coordinator at Lincoln High School, coaching USF and Super Bowl Champion BJ Daniels.  After one season, Simmons moved back to Clemson as a graduate assistant who focused his energy on the quarterbacks.  In 2007, Simmons moved on to Middle Tennessee State University where he spent five years as the running backs coach, passing coordinator, and offensive coordinator before moving on to Alcorn State.  Simmons was named the head coach for Prairie View A & M in 2015.  During his three seasons at Prairie View, Simmons brought the program to contender status in the SWAC Western Division.  While at Prairie View, he had 21-11 overall record and a 19-6 league record, highlighted by his debut in 2015 with an 8-2 record with a runner up finish.

In 2018, Simmons was named the head coach for FAMU.  The program saw significant improvement as they went from a 2-6 record the prior year to 5-2 in his first season, and quarterback Ryan Stanley was named MEAC Offensive Player of the Year.  Improvement continued into 2019, as the air attack was unstoppable and the team had a 9-2 record, the sixth best winning percentage in the nation, and they won the HBCU National Championship.  Last year FAMU made the FCS playoffs for the first time since 2001. The biggest win for the Rattlers last year was their final regular season game where they defeated the Bethune-Cookman Wildcats 46-21 in the Florida Classic. Simmons is now entering his fifth season with the FAMU Rattlers. 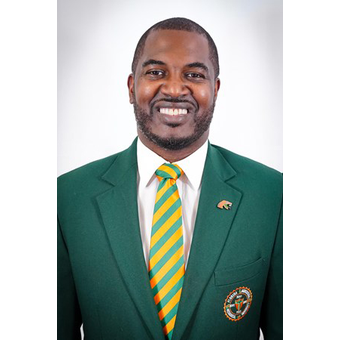